Adam Sea Klein is an artist and writer who lives near St. Louis.  He received a degree in both fine art and electronic design, and then became adept at many forms of design, traditional art, and writing over 20 years of constant pursuit.  Adam Sea Klein's artwork and books can be found on this website.

Klein also took some master's degree business classes, but changed course and opted to follow his interests into a decade long study of small business, economics, markets, politics and finance instead.  Adam does much casual writing in these socioeconomic fields as well.

Klein has always been fascinated with understanding the nature of reality, and has quested for deep understanding in the visual world and also beyond normal philosophical understanding. Along the way, Klein picked up a couple handfuls of professional skills, and drove his writing abilities to the fullest, publishing two books in his mid 20's, “The Saint Thomas Epilogues” and a modern re-translation of the “Tao Te Ching”. Klein deferred writing more examinations of world religions and philosophies, the intent of which was replaced by the combination of Cosmic Tome and Relative modality - his masterpieces that are made free to the public.  Instead of focusing on historical context, Klein decided to focus on what felt more pertinent, creative, philosophically new, or simply more experiential. Several years later, in 2015, Klein decided to complete his first story book called “Great, Big, Dreams” and quickly followed with "The Blobber Goo That Follows You" which began a torrent of story book writing and publishing that is about to unfold in 2018-2019. 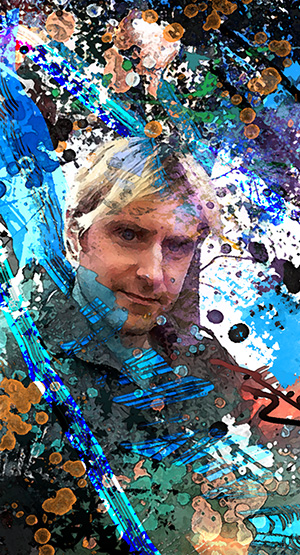 Klein is currently preparing the finished manuscripts for over a dozen books to be published, beginning this year.  His story writing frequently unfolds in modern poetic free-form style using flavorful language, parsed phrases, and quickly flowing short block paragraphs. This allows him to reach a particular cadence in his writing, and bend the rules of content in a way that he feels is more exhilarating: “Poetic flow has a benefit of potency, pressing language to do more with less words, to move  ideas into the most felt, tangible concepts with immediacy. I can focus on where we are going, and how it all must feel, and really through that medium, can push forward with increased balance and mobility. It's one of my favorite places to be.”

2018-2019 will also see the release of  3+ additional full books of modern philosophical poetry, written by Klein between 2006 to present, with an additional book of the same nature already in the works.

Klein is also very proficient in many forms of art creation. He is professionally adept as a painter in acrylic, oil, watercolor, graphite, charcoal, several other digital mediums including digital painting, graphic design, web design, photography, and advanced photo alteration. Klein is also capable of all aspects of the complex arts involved in 3D modeling, surfacing, and animation.

Klein has achieved a dozen styles traditionally, but commonly leans toward acrylics for the rapid layering capability, watercolor for the intense speed, and digital painting for absolute blazing speed and unparalleled intricacy. Klein has shown his work several times in the city of St. Louis, but pursued other career aspects more persistently, however he will be releasing a rather large collection of artwork right here on this website, focused on very energetic, ethereal abstract paintings. Klein is also skilled at the highest level of both realism and impressionism in painting, but has used realism more as a tool for understanding and as a constant series of personal challenges.  He is focusing on abstract art currently - and is preparing print files as we speak.

Enter your name and email address below to subscribe.

Please enter your name.
Please enter a valid email address.
Please check the captcha to verify you are not a robot.
SIGN UP!
Something went wrong. Please check your entries and try again.

"People commonly set out to reach a destination or complete a goal, and in the end, something much stranger occurs... they become a different person. Some of our best and worst experiences are transforming and it can require a steady effort to maintain and create a good world."

You can follow Adam Sea Klein on Facebook. News, contests and special offers are announced there too.

Jump to Top of Page

Just use the three arrow buttons